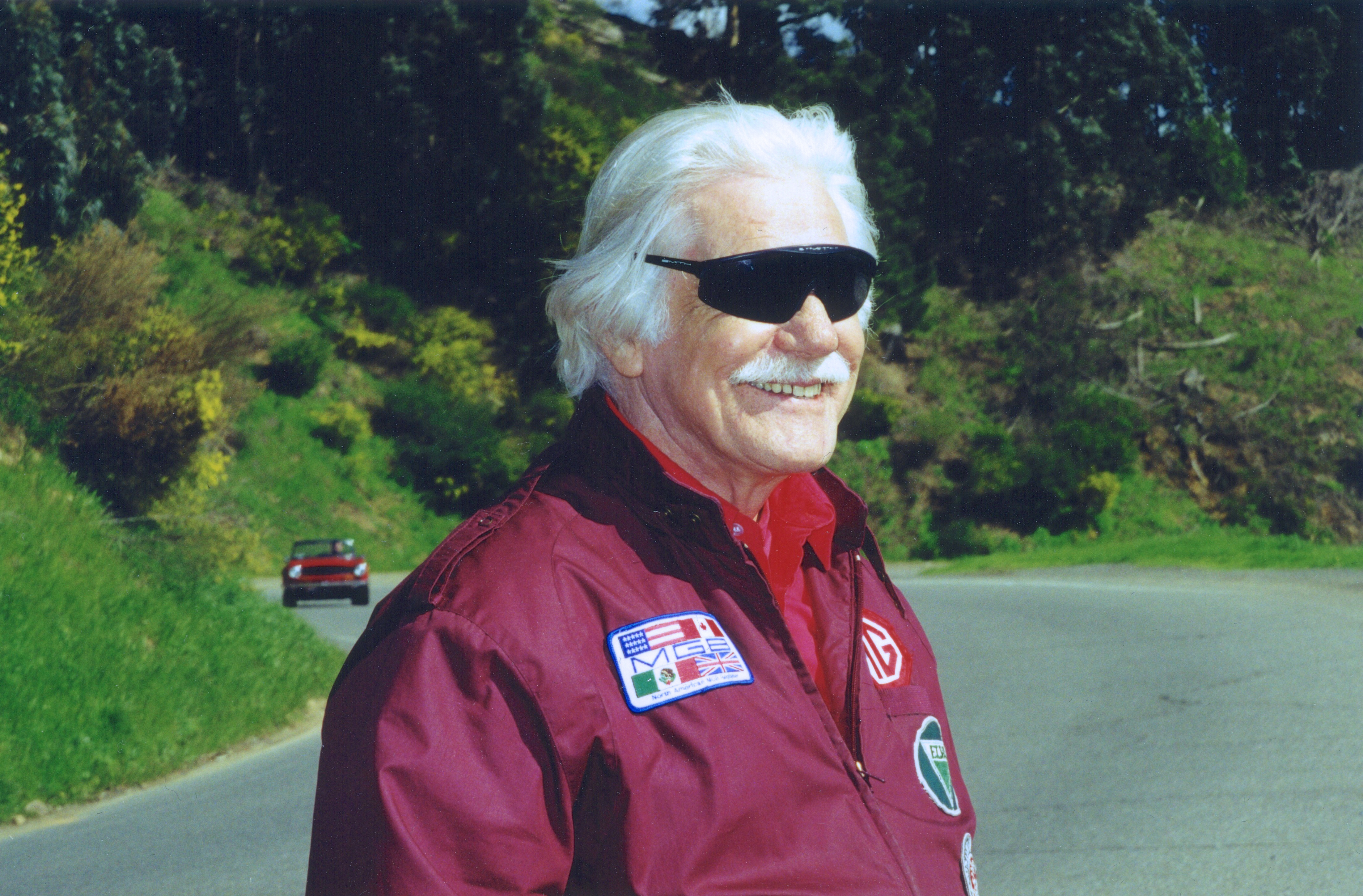 Earl and I are bound for Blackhawk in his red MG, the very same car and the very same route we took when I was seventeen. Actually, he has two MGs and goes to all the “Noggin and Natter” MG Club meetings held at various Bay Area pubs, as well as rallies, which are like treasure hunts with no treasure, only a secret destination that you find your way to by clues.

“Did you bring the spritzer?“ I ask anxiously. “It looks like a scorcher.” It gets so uncomfortable in the MG on a hot day, what with all the heat coming off the gear box, that the last time I spritzed a quart of water all over my face and clothes, drenching myself to keep cool. Going any distance with me and my back problem is a major production, so Earl always brings a small ice chest with two ice packs, as well as a special car cushion.

The mall is even prettier than I remember it. At one end is a modern fountain with tiered, round water tables, the runoff spilling under a bridge into a little lake that meanders between the shops and restaurants. It’s bordered by boulders, wild grass, and cattail reeds, and stocked with yellow and gold-spotted carp.

The Behring Museum is two stories, the black marble floors so shiny you can see almost as much detail in the gleaming reflections under your feet as you can in the antique cars all around you. There’s a 1926 Daimler made of German silver—so heavy they have trouble keeping the air in the tires, Earl instructs me. It was owned by a maharaja and has panes of smoked glass to hide his wives, an exterior wicker seat for the servant, and elaborate boa constrictor horns on each side. There are several Duesenbergs, including Clark Gable’s convertible coupe—they gave rise to the expression “It’s a duesy,” Earl explains. Also a 1931 Bugatti Royale made of thousands of small blocks of wood. What strikes me as funny about some of the earliest cars is that they’re conceptually incongruous—the cabs have the flowing lines of horse-drawn coaches, while the “business” ends look boxily like traveling chests.

One showstopper is rainbow-striped. “I wonder if that’s the original color,” muses Earl. “The cars I remember from my childhood were dark and somber. Henry Ford always said his customer could have any color they wanted, as long as it was black.”

I remark on the fact that many of the cars have TWO spare tires. Tire technology wasn’t all that advanced in those days, he tells me—and his family invariably had a flat on the way to Cape Cod every summer.

He explains to me about disk wheels versus spoke wheels that have to be tuned for tension and points out “artillery” wheels, which got their name because they have wooden spokes like cannon caissons.

Later we sit at the other end of the lake at a table with white linen under a canvas umbrella. A female mallard is snoozing on a boulder just beyond our table. When the waitress brings the bread, the duck rouses herself suddenly. Joined by her mate, they peer expectantly over the edge of the table at us, as irresistible as begging dogs at the family dinner table.

“Did I ever tell you about my Dad’s feud with our neighbor, Jack Landis?” I ask Earl, who shakes his head. I know I probably have, so I’m glad he’s almost as forgetful as I am (though he has the excuse of age) and I get to tell my stories more than once without having to worry about being a bore.

“When I went to Minnesota for my high school reunion,” I say, “My dad and I went back to see the old Dudley house together. He reminisced about how he’d bought me a duckling and built a small cage for it out of wood and chicken wire. The cage was just a little 12” box, so, as the duck grew, there was hardly room for it to turn around. Our neighbor, Jack Landis, told my dad it was cruel to keep a duck in such a small space, so my dad called the University Farm Campus and asked someone over there their opinion; he was assured it wasn’t inhumane, he claimed. He told me all this bitterly, still as angry at Jack as if it had happened yesterday.”

Besides believing animals couldn’t “know” anything, I remind myself, my father didn’t believe they had any feelings either—and I realize that in some way I’ve always identified with my duckling, as though my father built a cage for me, too, that I remained imprisoned in for many years.