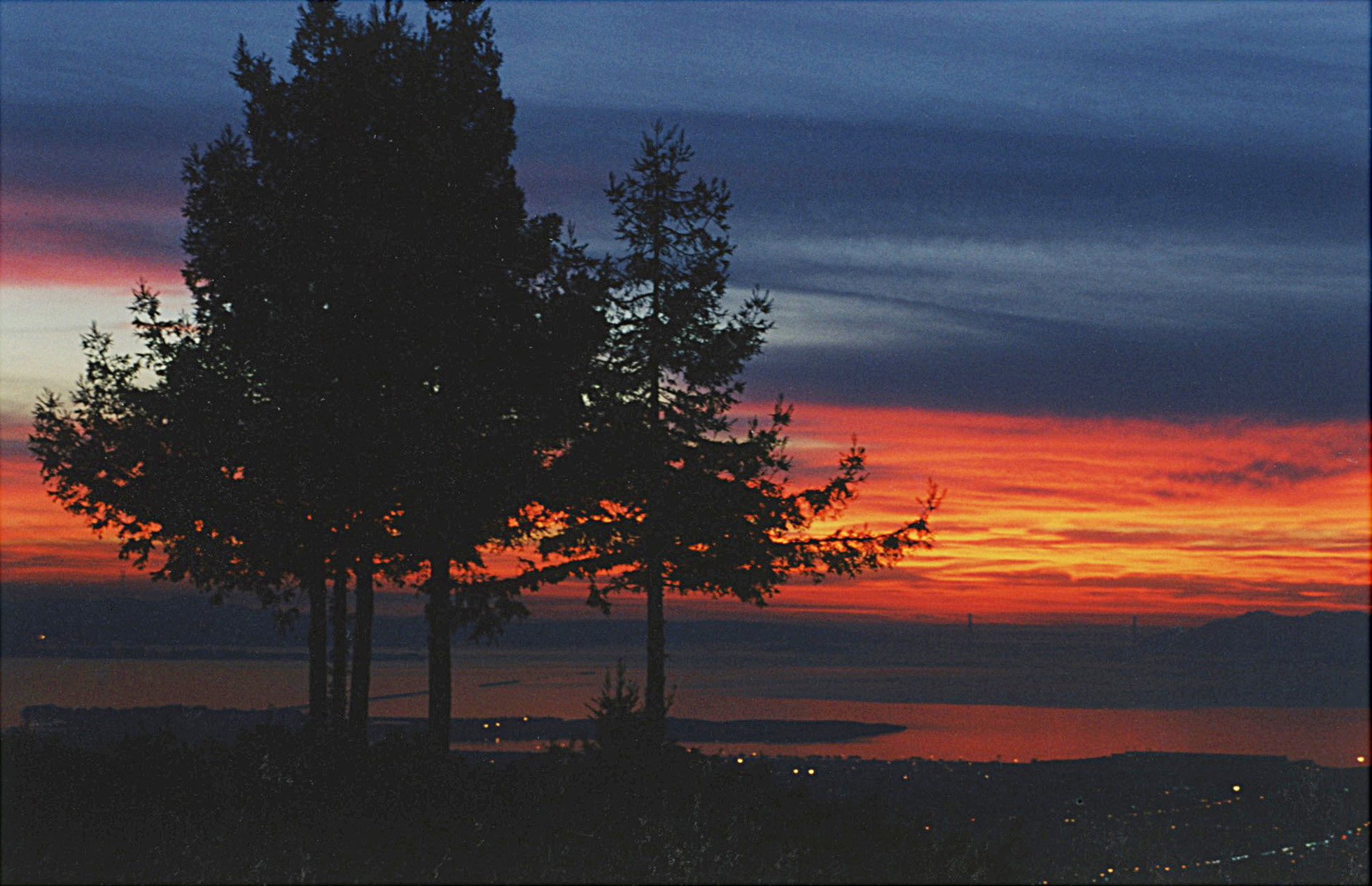 Ella is in L.A., celebrating Christmas with her mother and brothers, while Arielle is back in Illinois, visiting relatives for a month, and Igor is down in San Diego with his family. So I’m left to shift—mostly—for myself.

Before Ella left, we decorated our perfect noble fir—kept adding water, since it seemed to be drinking a lot—and admired it for a day or two before I noticed a pool of water under it and realized the tree hadn’t been drinking at all; the stand had merely been leaking. If the tree hadn’t been getting any water, it would probably be dry as toast by Christmas, I realized, like last year’s, which we figured must have been old when we bought it, since within days all our carefully arranged ornaments wound up crazily disarranged, hanging at ominous angles, the tinsel rope straggling every which-way—because all the branches had fallen. The year before that, one of the ropes of lights went out a day or so after we decorated the tree, but it would have been so much trouble to take all the ornaments off to replace it that we had to content ourselves with a half-lighted tree.

It’s Christmas Eve day and, at loose ends, I call Earl to ask if he’d like to take refuge from the holiday crowds in a movie house, even though I know we’ll be getting together for dinner in a few hours. I was hoping to see Jane Austen’s Mansfield Park, but when I check the newspaper, I discover it isn’t opening till Christmas Day. “OK. How about The Green Mile,” I suggest, “about a convict who heals people by laying on his hands?” Well, it sounded inspirational. After watching the most grisly electrocution I’ve ever seen, I tell Earl that if they’re going to show another one, I’m out of there. They do—and I am. Later, in the foyer, he wants to describe the final moments of the movie, but I say, “Please, no.”

I have him drop me off at home afterwards and rush off to Long’s to pick up my photos. He called a few nights ago to tell me the moon was the closest it had been in the last hundred and fifty years (later I heard thirty), so I’d hustled out with my camera and stood in the middle of Hearst, in between onslaughts of traffic, taking pictures of the moon rising over the Berkeley Hills.

But all my lunar photos have come out blurred—the shutter must have stayed open longer than I could hold the camera still. I was planning to make cards of them to give Earl as a gift. Now I’m embarrassed that all I have for him is a joke present—a couple of cat dishes with blue and green winged felines for Sukie and Golden Boy, his formerly feral cats. Actually, I’ve been shopping for photo frames for him for weeks—we even stopped by Cost Plus after the movie and I shooed him out of my aisle so he couldn’t see what I was examining—but I haven’t been able to find any I like. “I’ve got to give him more than cat dishes!” I groan. I waste time spinning my wheels and finally, with only minutes to spare, drag out the paper cutter and hurriedly make him some cards of the sunset photos I took the night before. I’d happened upon a spot along Euclid with a panoramic view of the Bay Area framed by the trunks of a few giant spruce that, strangely, had foliage only above and below the view—as though they’d been deliberately pruned that way. In one photo the sky looks molten beyond the towers of the Golden Gate Bridge, and the waters of the bay are a deep red.

Earl arrives with two Christmas gifts and a large postcard—of a bobcat peering through tall grass. On the back of it, he exhorts me in bold letters, “Stop casting porosity!” There’s a crudely painted sign along an industrial stretch of highway 980—and that’s what it says. After eight years of deliberation, we’ve yet to figure out what it could possibly mean. His presents, which I open on the spot, are a beautiful book of lighthouses around the world—the Pigeon Point lighthouse on the cover—and another hefty tome called The Art of Maurice Sendak, the children’s book author who inspired me to become one too.

“Oh, Earl!” I cry, “You couldn’t have picked better gifts!” He used to buy me stuffed animals that kept getting bigger and bigger, until I declared a moratorium on them because I was running out of space in the apartment. Sometimes he gives me un-birthday presents too. When I first mentioned I had insomnia, he presented me with a mallet he’d sprayed with gilt paint and adorned with a red velvet ribbon—for me to knock myself out with at bedtime. Well, I think to myself, I’m just going to have to find a couple of fabulous picture frames to give him as un-Christmas presents.

He takes me a round-about way—another surprise—to Skate’s, which is built over the water on pylons. The Berkeley pier runs alongside it, halfway to Treasure Island, or so it appears. In the distance you can see the twinkling skyline of San Francisco. This time I’m in a gaudy, sequined sweater, and we’re both sporting our red velveteen Santa hats. I was hoping he’d forget about the hats. One evening we went into a fancy restaurant and were seated by the waiter in the darkest corner, though there were plenty of other—better—tables. When I went to the ladies’ room after our meal, I saw a huge loop of hair, sticking straight up from the top of my head, like a crest. In the MG I always bind my hair in a ponytail so it won’t blow into my eyes, and apparently when I removed the baseball cap I wear, it had pulled out a big hank of hair. “Why didn’t you tell me?” I asked Earl. “I didn’t notice,” he shrugged. “You didn’t notice?” I exclaim. “You’re an artist!” “When I look at you,” he said, “I don’t see the details. I see an aura—a radiance.” I just hope the same thing doesn’t happen this time when we doff our hats.

I order the most outlandish-sounding entree on the menu—scallops wrapped in prosciutto with a fig-apricot dressing. Earl settles on the salmon.

The restaurant is garlanded with wreaths and Christmas lights, the decorations reflected in a solid bank of windows on two sides, doubling the illumination and festive ambience. Sometimes when we come—usually at sunset—we watch gulls taking off from the roof, a seal that’s strayed too far, sailboats gliding into the Berkeley marina or ferryboats bound for opposite shores. Tonight we reminisce about growing up in northern climates with long, snowy winters.

“I remember in the coldest weather, my forehead would ache because it was the only part of my body that wasn’t covered.”

“And it hurt to breathe,” Earl adds.

“My knuckles bled, they got so chapped. Too bad they didn’t have Neutrogena back then.”

“Well, that didn’t work for me,” Earl reminds me, dryly. He’s become allergic to turpentine, his hands all cracked—an unfortunate sensitivity for a painter. When he tried Neutrogena, at my suggestion, he said it hurt like hell.

“We used to skate all winter on White Lake,” he remembers. “We’d build a big bonfire at one end and huddle around it to get warm. When I told Bonny about the time my father and I climbed over the fence to the insane asylum to skate on their pond, she said, ‘That’s the first time I’ve ever heard of someone trying to break into an insane asylum.”’

After dinner Earl drives me around the neighborhood to look at all the Christmas lights, one of our traditions. This year, every other house is draped with icicle lights, though they first appeared only a year or two ago. “Jeez!” I say, “Why didn’t I think to invent them first? I’d be living in Malibu by now.”

“I guess I’m ready to head for home,” I say after a while because the houses have a disappointing sameness.

“No, just tired,” I protest, dismayed that he would think that.

Later, sipping some eggnog in front of my tree, I realize I feel a little bad about the day, about having picked the movie I did and not having found a special present for Earl, even about not acting more enthusiastic about wearing the Santa hats—I would have explained, but I know he thinks it’s ridiculous to fuss over your appearance. Well, I’ll find him a couple of beautiful picture frames and do my best to redeem myself, I think as I pull the plug on the Christmas tree lights and pad off to bed.